Finally… a personalized mindset program which reviews hundreds of YOUR hands to get to the root of your biggest technical leaks.

I am a former Run It Once Elite Pro coach and I have thousands of hours of experience coaching players at all levels, from low stakes to nosebleeds. My mission is to guide all of my students toward endless improvement, both on and off the tables. 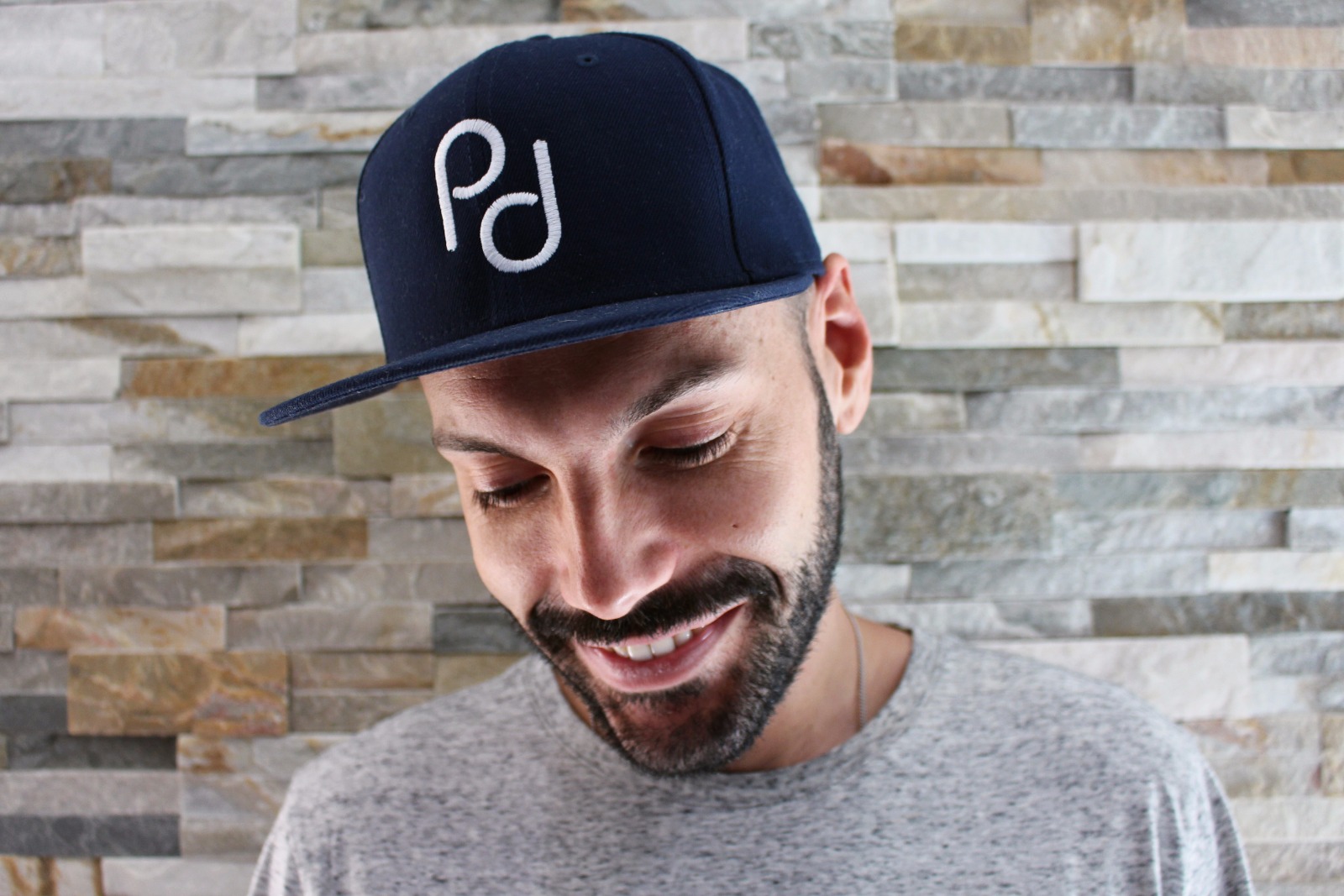 There’s a phenomenon in poker that I find absolutely fascinating, but almost no one ever talks about it.

We’ve all had this experience: You’re in a big hand under pressure, you think you’re analyzing things clearly, you make the play… and you get stacked. Suddenly all the information you couldn’t see comes flooding in.

It’s like realizing you were under some kind of spell during the hand. We all have these moments where we completely lose control over reality in our thought process and we don’t realize it.

But why do these mistakes happen? And what would it mean if we could get better at detecting assumptions before they send our decision-making process off the rails?

Let’s get one thing straight: this is not just a technical issue. We know what the right play was in a post-mortem, or even just a few seconds after the hand is over. These are severe mental game breakdowns.

I find it interesting how, in an era where most of the industry is searching for smaller and smaller edges, I frequently see very strong technical players chop 10 bb off their win-rates with these mistakes.

Making just a few of these plays per week can prolong downswings for months. In severe cases, it can cause successful players to spiral into career-ending downswings.

The worst part? These players rarely realize what happened to them.

Students have told me exactly what these downswings feel like:

Brutal truth: the longer you have been on a downswing, the more danger your career is in.

Waking up daily, knowing that you have to bring your A-game, but not knowing how to access it. Not knowing what thoughts you can trust, or what’s even real.

What if you could find out this was all just a story? That reality isn’t cruel or unfair, but that you just need help retraining your perception at the table so that you can focus on solving the puzzle of each hand, and making winning decisions.

And with that in mind, understanding that every mistake has put you on the path to becoming the best player you can be.

A player who has a clear mind, who leaves the session proud of his decisions, and is eager to get back to the tables tomorrow.

I’ve worked with enough players to know that nobody is immune to regressions. Even the very best players are constantly going through iterations of regression and improvement.

It’s the natural cycle of high performance, and it should be embraced, not criticized.

But players rarely talk about this. It’s not admirable to be on a downswing. They feel guilty about their poor play, and because of that, their downswings last longer.

They pile on thousands, or even tens of thousands in losses that could have been avoided.

On the other hand, some veteran poker icons have been able to rise to the highest stakes in the world and stay there for the long-term.

So if regressions happen to everyone, then how do the most successful players manage to keep regressions from ending their careers? How are they able to not just recover, but play better than ever?

As a high-stakes coach, a question I often get asked is, “What is one thing that the most successful players all have in common?”

What I have found is players who achieve long-term success are able to do this because they solve hands more consistently, in a way that is scientific and reproducible.

Their analysis is scientifically driven, compared to the average player, whose analysis is unreliable and emotionally influenced.

They have purified their thought processes so that they are always thinking about the most important facts in the right order.

This isn’t really about seeing technical aspects of a hand that no one else understands. It’s about being able to identify the most important data points in each hand and prioritize them properly.

These are the skills that lead to calculated, consistent decision making. These decisions add up over time and compound into an enormous edge.

Over the course of a career, it’s what separates the good players from the truly world-class.

And it’s not some innate talent that only a few people are born with. What separates the best players from everyone else is a skill that can be methodically trained and improved.

That skill is your mindset.

Take a look at the graphic below. What do you notice about the two players? 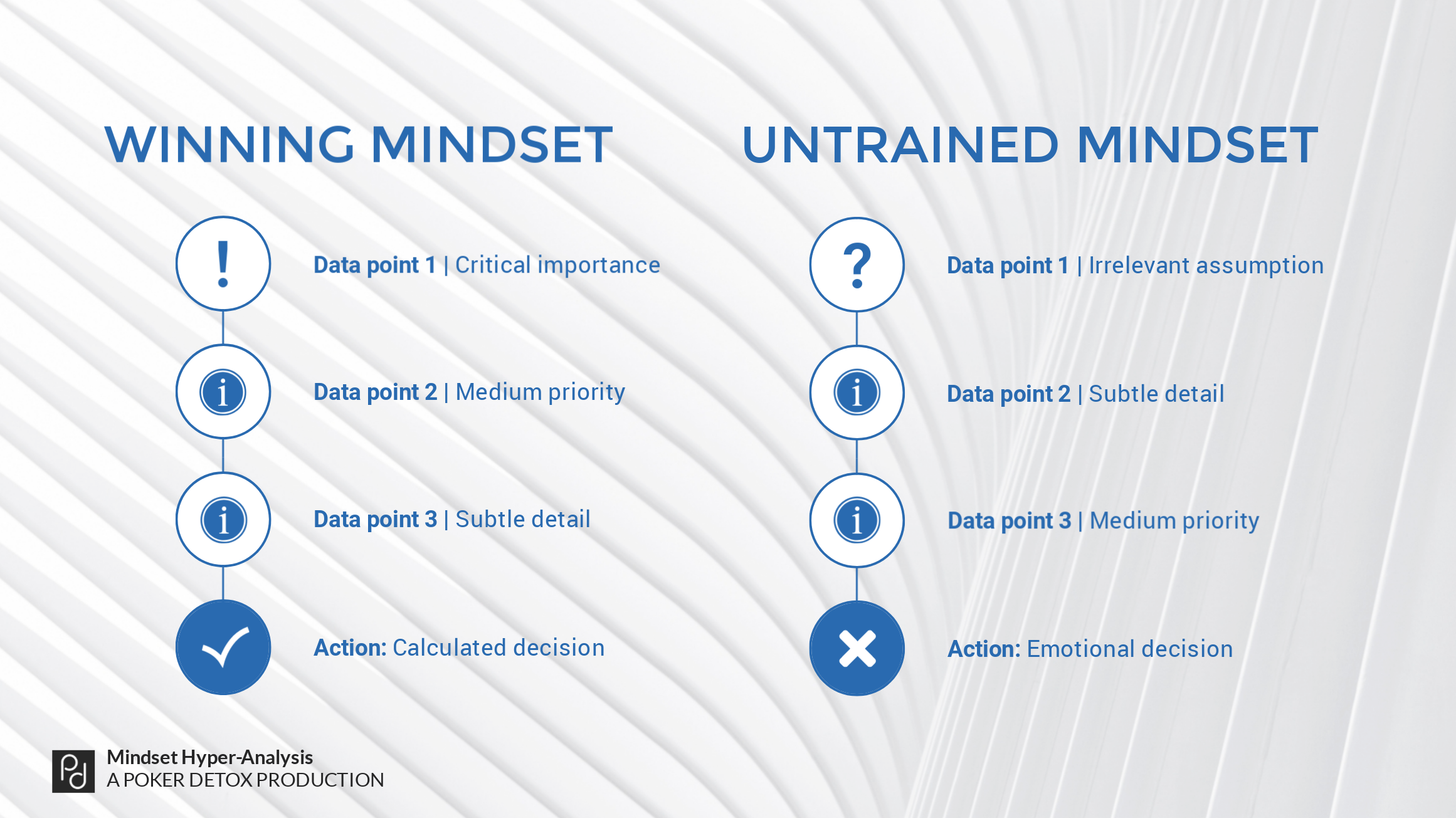 The player with a winning mindset is able to identify the most important data points, prioritize them, and come to a calculated decision.

The player with an untrained mindset is unable to distinguish what is relevant from what is irrelevant.

There are data points in his analysis that don’t belong there at all, some important data points are left out, and the most critical data point is often a mere afterthought. His decisions are emotional and inaccurate.

When a player with an untrained mindset is running bad, these mistakes tend to multiply. That’s how a bit of harmless variance can turn into a dangerous downswing.

And that’s when the most consistent players reap the rewards.

A technical approach to mindset training

In the past few years, I have become fascinated with mindset coaching. I believe that even for successful players, there is massive edge to be found in mastering mindset.

But I have found that most mindset coaches lack a strong technical understanding of the game. They may be able to identify the core emotional issues, but they do not analyze specific hands, and they are unable to retrain the player technically.

At Poker Detox, we have found that the best way to create lasting change is to attack the problem from both sides—technical and mental—using the player’s own hands.

This philosophy has helped us discover powerful new approach for training a winning mindset. The techniques we use train players to become better decision makers—to access their peak performance and achieve world-class consistency.

Best of all, we give our players the tools to become independent learners. I’m not interested in repeat business, I’m interested in referral business. My goal at the completion of your training is for you to never need to use my services again.

And now, for the first time, I am publicly offering this material as part of a 1-on-1 personalized training program.

The only program that exposes your blind spots, purifies your thought process, and retains you technically

Mindset is often overlooked because it rarely includes the technical elements of a hand. But this program is different.

Mindset Hyper-Analysis begins with an extensive hand history review to identify the most common patterns in the student’s technical leaks.

Then we do a 1-on-1 deep dive where we replay the hands to get to the emotional core of the mistakes.

Finally, we retrain the student technically and distill his analysis with repetition by drilling the corrected, simplified data-point analysis.

This is the only public 1-on-1 coaching package that I currently offer. It is a four-chapter course which is specifically tailored to the blind spots in your mindset. One chapter will be covered per week, including a 1-on-1 session with me at the conclusion of each chapter where we cover all misplayed hands that pertain to that chapter.

Step 1 – Application: Fill out an application describing your situation including your current stakes and past results, your biggest strengths and weaknesses, and why you are interesting in mindset training.

Step 2 – Hand review and data point analysis: Upon accepting you for coaching, I will review a database of 10,000 of your recent hands and search for patterns in your technical errors that I believe to be caused by mental game performance issues. I’ll then send you a selection of hands and ask you to analyze them in a written format.

Step 3 – Mindset pattern recognition and consultation: I will use your written analysis to get to the root of your mindset issues and create a four-part 1-on-1 mental game course to correct them.  You will receive a course outline including an overview of your biggest leaks and the main topics for each chapter. The charge for the hand review and leak summary is $500.

After the consultation, I will send you the pricing information and you can decide whether or not you would like to move forward with the full four-chapter course.

Step 4 – Private mindset and technical retraining: Once we get into the training, we will not only identify your mental game patterns, but we will also relearn how to think about the specific hands technically. By attacking the problem from both sides—mental and technical—we will achieve lasting growth.

Step 5 – Written review: My assistant, Matt Hunt, is the only coach in the industry with a Masters degree specializing in linguistics. He will analyze your 1-on-1 session recordings to offer additional insights along with a written summary to ensure that you fully integrate the material.

“I started working with the Poker Detox team in early 201 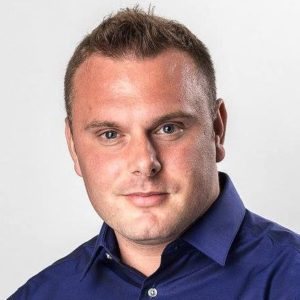 7 and watched Nick turn a group of losing players into a winning company. Some of those players reached high stakes in under a year. This is an incredible feat and something I didn’t think was possible in the modern poker landscape. The PD community is full of enthusiastic players working hard to reach the top and it was a pleasure working with them and watching them grow. Highly recommend!”

What is the core advantage of a winning mindset? Above all, it is consistency in your performance.

The most successful players are the ones who perform consistently, who analyze hands
scientifically, and don’t let their emotions influence their decision-making process.

Many players don’t like to hear this. They would rather believe that the best players in the world are creative masterminds who have more complex strategies than anyone else.

This may be true to some extent, but the reality is it doesn’t matter how strong you strategy is if you cannot implement it consistently with a clear mind.

By playing more consistently than your opponents, you will reap the rewards of their mistakes, not by forcing blunders, but by allowing them to happen to your opponents naturally.

You’ll win not by making heroic plays, but by capitalizing on opponents who are overcome by emotions and irrelevant assumptions.

You will learn to think clearly, to have confidence in your decisions, and to thrive under pressure.

A year from now, the industry will be revolutionized by the players who took control of their mindsets.

The edge is real, and it’s waiting to be taken.