What if you knew your opponent’s weaknesses better than they knew their own?

They wouldn’t even know that you were exploiting them.

Get instant answers from the most powerful preflop blueprint ever created.

How do you know what the most profitable plays are preflop? For most players, the best-case scenario is that they bought some range charts, or a preflop solve and studied the ranges.

*These are not the most profitable plays*

How do you know what the most profitable plays are postflop? For some of you, it means running spots on a solver, or maybe even adjusting the ranges for the players and seeing what the solver comes up with.

*These are not the most profitable plays*

You see, there’s two problems with these approaches:

1) Real players do not play anything like the solvers;

2) Solver outputs are ridiculously complex, and impossible to execute with any kind of accuracy. In the end you play a weak and exploitable version of what you imagine the solver strategies to look like. You also miss out on a ton of straightforward exploit opportunities by sticking dogmatically to what the balanced solver told you to do.

There is a far more profitable, smarter, and straightforward way:

You see, in the last couple of years a more advanced database software gave us the ability to study how populations are playing in practice. We could see specifically how regs play against each other, and how different types of fish play.

We combine both the solver and population data methods together to come up with max EV strategies against all types of opponents. This is the most scientifically rigorous approach possible, and brings guaranteed win-rate when executed correctly. It also ends up being by far the easiest way to play. For some reason people seem to think that optimal play must be the most complicated and elaborate, but as Einstein remarked: “Everything should be made as simple as possible, but not simpler.”

Here's an example of what we analyze in Black Box: 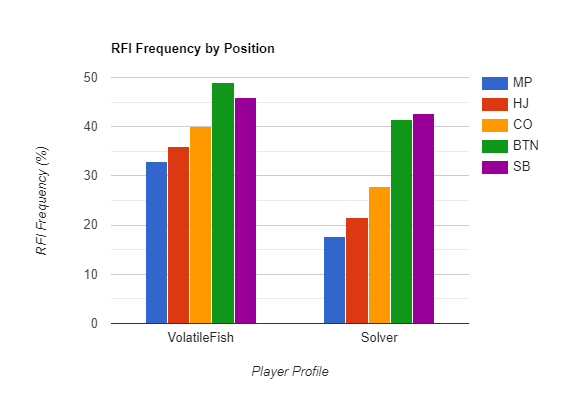 We all know that fish love to limp, but what about their raising ranges? By sub-profiling 'Volatile Fish' and 'Passive Fish' we find massive differences in the preflop strategies of different types of fish. Here we see just how incredibly wide Volatile Fish raise, despite also having a wide limping range. Using this data we can re-calibrate our defending strategies to max exploit the player profile we're facing.

In early 2017, we released a course called Night Vision which used GTO solvers to plot optimal solutions against pool trends. By studying millions of hands, we gained vision over the pool’s imbalances across gigantic samples.

For the first time, we had irrefutable evidence in support of a winning exploitative strategy. By pouring on aggression in zones where human players systematically overfolded, we were able to gain a massive edge over a pool, and they had no idea what hit them.

What we had was a consistent, data-driven system. And not only was it more incentivized than GTO, but it was also simpler and more practical to implement.

Within a year, the Night Vision community grew to over one hundred members, and many of these players achieved massive success. The reason they were able to hack the system is that they were willing to put their trust in something larger than themselves. Some of these players even rose from low stakes to high stakes in that time.

They were able to defer to the data in unclear zones and capitalize on the pool trends, rather than having to always rely on their judgment on a case-by-case basis.

Not only that, but they were able to thrive in a new learning environment that was collaborative and scientific. They had a common goal to find proven, practical exploits. They didn’t waste their time with complexity and speculation that ultimately leads nowhere.

Now, we’re applying this technology to the other side of the game tree. Rather than studying the pool’s postflop frequencies, we’ve studied the preflop game tree to exploit the pool in zones where they are imbalanced, and where they use different sizings in an exploitable way. We also found the highest EV sizing schemes to use based on hundreds of millions of data point hands of real-world performance.

For the first time we have created an all-encompassing blueprint for the preflop game tree, having micro-analyzed every line all types of opponents take, and establishing what optimal play looks like with preflop solves for different sizing schemes and rake environments. Everything you need to approach preflop with confidence and advantage over your opponents is here.

Here’s a sneak peek at what’s inside the course…

WHAT'S IN THE COURSE

*Customers of the previously released 'Preflop Blueprint' 2.5x Monker Solve get $600 off Signature or Ultimate.